Why AWM Is The Best Sniper In PUBG? Detailed Discussion

by Abu Bakkar
in PUBG Guns
0

PUBG Mobile is one of the most popular and most played games in the present world. This game was released on March 23, 2017. After releasing this game, It aroused a worldwide response. There are many interesting facts behind this game’s huge popularity, which attracted people to love this game. And now PUBG is the renowned name to almost all the gamers in the world.

Through this article, today I am gonna write about the best sniper rifle of PUBG name AWM. If you are a PUBG gamer, you may know that there are so many weapons in PUBG to kill enemies. But do you know, to kill an enemy from a very long range which gun is perfect? It is AWM. And AWM is the most beloved gun for all the gamers, but why? Keep reading this article; you will get the answer.

The full meaning of AWM is Arctic Warfare Magnum, but shortly known as AWM to the PUBG gamer. Whereas PUBG is a battle game, there are so many weapons in this game. There are so many types of guns in PUBG, such as Assault Rifles, Sniper Rifles, Designated Marksman Rifles, Submachine Guns, Light Machine Guns, Shotguns, Pistols, and many more.

AWM is a sniper rifle in the PUBG known as the best sniper to the PUBG gamer. But the question is why AWM is the best sniper in PUBG? Before the answer to this question, you need to know the specification of this gun in PUBG. Keep your reading. Below, I have made a chart. You know about the gun overview based on the game from the below table, like Damage, Bullet Speed, Firing Modes, Method, and many more things. Have a look.

Spread is usually to indicate the extent of scattering by shots from a single shotshell, measured as the smallest circle containing all the shots on the target. In the following chart, the spread of AWM has been given; take a look.

The deviation word is used for a weapon to describe how much the reticle moves after firing a shot in PUBG. The deviation included many things about a gun: Base, Recoil Gain, Max Limit, Move Velocity Reference, Crouch Modifier, etc. Check the below table to know more about the AWM deviation in PUBG gaming. 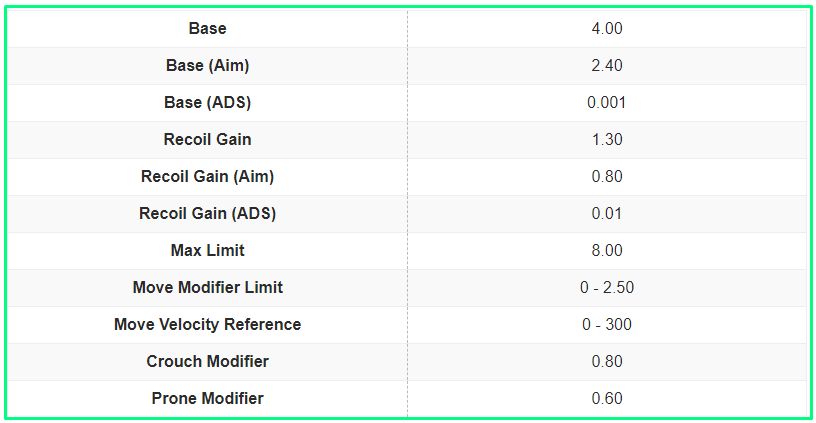 In PUBG, when a player is shooting with AWM, it throws the aim off unless they know how to control this gun. And recoil is the AWM spring back action in PUBG. It will be a very effective way for a PUBG gamer to learn AWM recoil control in PUBG. The Sway of AWM for the PUBG game has been given in below; check it out.

Where is AWM located in PUBG?

Sometimes’s the question could come to your head that where is AWM located in PUBG maps? A pro or experienced player always knows that from where he/she can collect the AWM. But the new player can not find AWM easily. Today I am telling you where you could collect AWM, and it is for the Erangle map.

First of all, it’s good for you to know that AWM is not stored in the PUBG map like the others weapon. Usually, this gun is found on the drops, which are conveyed by planes. To get AWM, try to loot the drops. It is the first way to get AWM. The second way is the flare gun. If you have a flare gun, choose a safe and secure location inside the white safe zone and fire it to the sky. Then a random weapon care package will drop, there you could able to find the AWM. Another way is, target a player who has the AWM, then kill him/her and loot AWM from him/her; it is a simple and interesting way.

The specification of AWM proves why it is the best sniper rifle in PUBG. This article shows just the AWM specification in the PUBG game, not in real life. It means this article has no relation to AWM’s real-life gun. Some of the information of this article has been collected from a PUBG game-related site. Please share it with your PUBG lover friend and allow him to know more about the AWM in PUBG.

Is PUBG Banned In Pakistan?